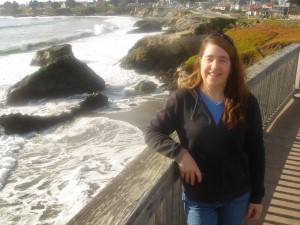 Our June 2012 Volunteer of the Month, Jeannette Shaw, says volunteering and giving of her time at Grey Bears is fulfilling. “Grey Bears is an amazing organization that helps others in so many ways through all of their programs.”

Born in Burlington, Vermont, Jeannette spent most of her childhood in the nearby country towns of Jericho and West Bolton. She has many fond memories from those days, but being the adventurous type, more were in store. At age 16 Jeannette yearned to see more of the world and began researching each state for the quality of schools, jobs, housing, agriculture, weather and scenery. She was intrigued by Big Sur and the California Central Coast and its rich agriculture base. Three years later in the 1980’s, she and her son moved to Santa Cruz.

Jeannette has a methodical operations mindset which comes from her experience working with various companies, including a chocolate factory, soap factory, component manufacturer, vitamin distributor, a software company and disc drive manufacturer. While working from 2002 to 2007, she attended classes and obtained a Bachelor of Science Degree in Business Management. Her last job ended a year ago after 17 years.

Jeannette volunteered for a Santa Cruz Cancer Benefit and worked on several of their projects. Her son told her about Grey Bears so she began researching the 39 year-old nonprofit.

“Grey Bears has always been on the forefront of reusing and recycling to help others, which is what I like to do,” she says. An opportunity came up for her to help in the kitchen as a lunch prep cook for six weeks in November 2011, and soon after Jeannette began helping on the line with the Brown Bag program.

Jeannette’s efforts and skills are gratefully received and we deeply thank her for her volunteering at Grey Bears.