Cal: Born on 5/21/47 in Montevideo Minnesota, population 325. “We moved to Sacramento when I was in third grade. My dad was a chicken farmer, which is coincidental because Grey Bears Chanticleer warehouse was a former chicken coop. We moved to Santa Cruz in 1962.”

Greg: Born 9/24/51 in Santa Cruz and grew up on Sumner Street near Gault School. “I took electronics classes at Santa Cruz High and got a job in TV repair to support my remote control airplane habit. I met other remote control airplane hobbyists, many of whom were Lockheed engineers. They suggested I apply there and was hired as an electronic technician. A year later I met Cal flying model airplanes and recommended him to Lockheed. We each spent the next 30+ years there.” 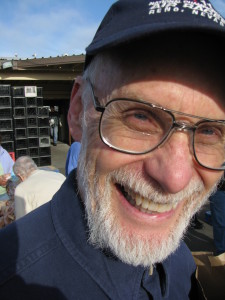 On volunteering – Greg: “I retired from Lockheed after 33 years and did nothing for two years. I discovered Grey Bears when Cal, who had been volunteering in computer refurbishing here, invited me to join him.”
Cal: “I began volunteering at Grey Bears in 2008 on the brown bag line and in quality control, and then in electronics refurbishing. Coming from Lockheed to Grey Bears, I know that controlled chaos can work well. I called Greg to volunteer with me. We refurbish all kinds of computers for sale in the computer store. We’ve probably rebuilt 2,500 computers.” Greg: “I think we deserve our own reserved parking spaces.”

Interesting electronic donations? – “Some folks drill holes through their computer’s perfectly good hard drives. But they don’t have to worry because our policy is to sanitize hard drives before installing new software. One woman dropped off two laptops that were soaking wet. She explained that she wanted to kill the computers and remove her data. We also receive many strange and unique donated items. We got in a colonoscopy machine and dental chair with all of the drill attachments the other day which we decided not to refurbish.”

Why Grey Bears? – Cal: “My mother was a brown bag recipient in the 70’s shortly after Grey Bears began. I remember one day she offered me some cheese. I asked her where she got it and she replied, ‘Grey Bears.’ I thought that was pretty cool. They helped my mom a lot so I knew it’d be a good place for me to volunteer.”
Greg: “I really appreciate everything Grey Bears does, and my wife appreciates that I have somewhere healthy to volunteer outside the house.”

On hobbies – Greg: “I’m an amateur winemaker and one benefit of volunteering at Grey Bears is being able to take home berries which I use to make wine in barrels. Cherries and raspberries make the best wine.”
Cal: I’ve built, flown and sold about 15 actual airplanes and other experimental aircraft. I may have one more in me and thought about building a private airplane for Grey Bears, but our lot isn’t quite big enough to land it.”