↓ Skip to Main Content
Volunteer of the month, Dan Reed

Volunteer of the month, Dan Reed 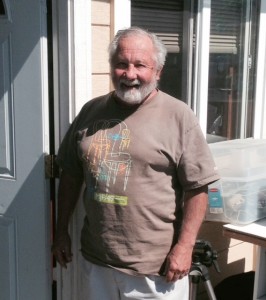 Favorite saying at the time: “Outtasight!”

Activism:  While a meter reader for the Soquel Water District, I was fired for organizing employees to get benefits. I spent 34 years at Lochheed as an electronics tech, repairing equipment. I became a union business agent and contract negotiator for IAM for 10 years “working for the little guy.”

Hobbies: I painted with watercolors for about six years, and played basketball. Even in my sixties I could take some of the younger guys. I also played softball for 40 years, and began umpiring in 1982. I had always been a bit reserved, some would say shy. Umpiring was my assertiveness training.

On volunteering: I’ve always loved helping neighbors, and children. I read to nursery school kids and taught Sunday school for 34 years. I came to Grey Bears in 2009 thinking I’d just volunteer one day. Now I spend three days in the electronics store, and also work the brown bag line both days. I’ve delivered to homebound seniors too, which changed my life.

Most challenging: I count the bags that go into the cars. If I make a mistake we hear about it.

Most unusual donation:  Space Invaders and other old arcade games.

Most fun – Grey Bears electronics store attracts old engineers and scientists. We’re like a modern country store, sitting around the stove, telling stories. Customers add to the conversation, and it becomes a fun way to socialize.

Best advice:  My brother and I like a saying from an old Clint Eastwood movie, “endeavor to persevere,” or better put, “keep on truckin’.”