↓ Skip to Main Content
Surf’s always up for Nola Moosman

Surf’s always up for Nola Moosman

“My community since I arrived in Santa Cruz back in the ‘70s are the surfers – at 4-mile, and the women’s community. Photography is my profession and my passion. I’ve shot a lot of surfers up at 4-mile. Great surf and amazing surfers.” 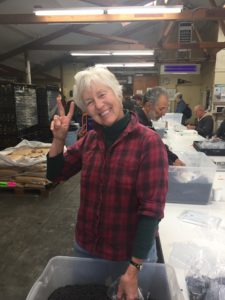 Born in Valentine, Nebraska in 1951, Nola, 66, spent three summers in her youth with relatives on the East Coast. They took her to the ocean and her love affair with the waves began.

“I asked a guy if I could use his surf board. I stood up on the second try.”

She found a summer job working at a sandwich and pizza place, and hitch-hiked to the beach each day.

It didn’t hurt that Nola is a self-professed ‘jock,’ who as a child during Nebraska winters rode her toboggan down snow runs standing up. During the fourth summer she found Santa Cruz and its many coastal breaks. She also spent time on Oahu’s famed south shore.

“I’ve been surfing for 47 years. Last year I broke my leg, which kept me out of the water for a while. I like surfing Capitola and Manresa to avoid the crowds. I love the beach breaks.”

Surfing is not without risk. A year ago at Manresa, a 6-foot shark swam underneath Nola, her toes dangling in the clear water. 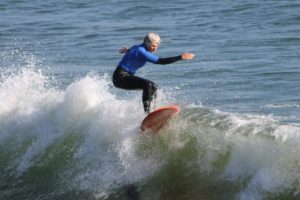 “I saw him roll onto his side, his big yellow eye looking up at me. I saw the mottling on him, how long his tail was, and his length. I remember thinking, ‘that’s a pretty effective swimming machine.’ His fin came out of the water as he passed and I thought ‘he’s probably not after me.’ I turned toward shore and croaked out, ‘Shark!’ to the others around me. He was just a juvenile hunting around the cement ship. He wasn’t the first shark I’d seen, but the first one who looked at me.”

“I started working in quality control, preparing produce for the bags, which is the kind of work I grew up doing on our family farm in Nebraska.”

“I’ll say this: that is the ‘workingest’ bunch of people I have seen in this town. The volunteers in quality control know how to get the job done. They’re fast, efficient and jovial, and great fun to be with.”