“Worms are so amazing, they’re my production area,” beams Marla King, Grey Bears volunteer vermiculture (worm) composting teacher. Marla, 74, grew up in nearby San Jose. At 28, she moved to a farm in the summit area, in 1974. “We had a big garden and raised chickens and hogs, too. I built a compost area with 9 palettes. That was my first foray into the transformative art of composting.”

While working as a buyer/planner for Fox Racing Shox, a position that required a high level of organizational skills, Marla attended a worm composting class at UCSC. 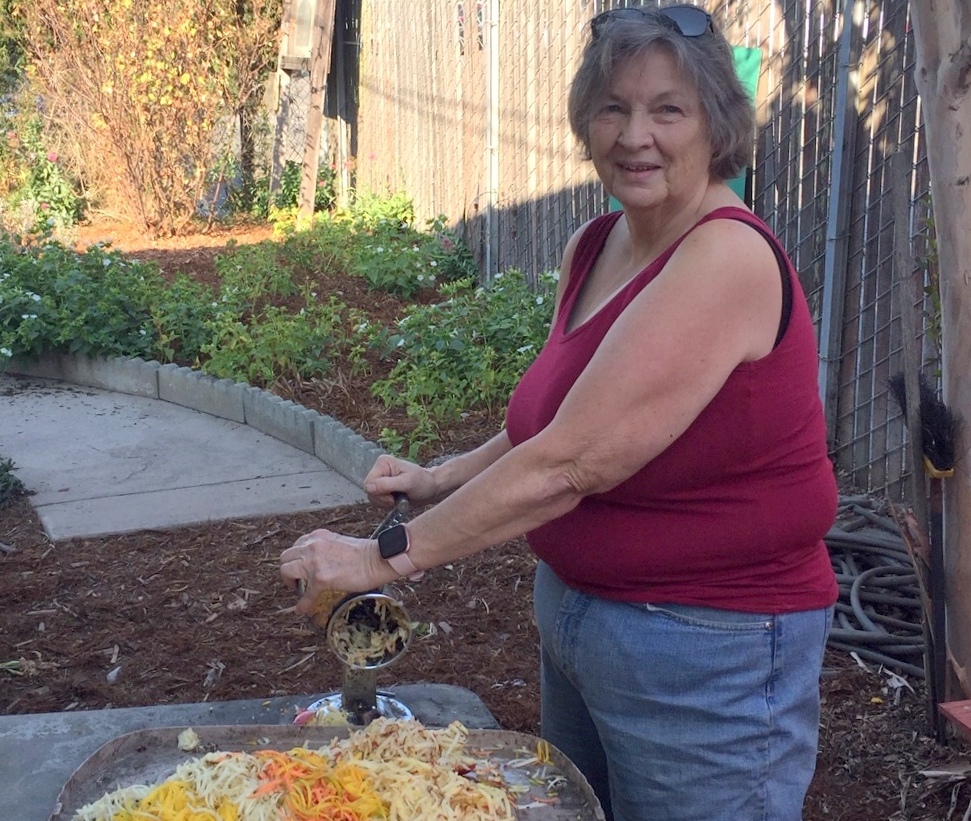 Marla using a manual food grinder before adding it to the many worm bins at Grey Bears vermiculture demonstration area.

“At that time we used large Rubbermaid tubs to start our home vermi-composting. I really got hooked.”

Marla now lives in Felton. When the CZU Lightening Complex Fire hit she had to evacuate from her home that features an orchard with 30 fruit trees.

“We have persimmons, apples, pears, citrus and, or course my vermi-composting area. I was worried sick that it would all burn.”

During her evacuation she stayed with a friend in Chemeketa Park, near Lexington Dam. “I couldn’t sleep, so I organized all of the herbs and supplements in my friend’s kitchen. I guess that’s the planner part of me,” she laughs.

Marla first volunteered at Grey Bears in 2015 to help with the six Earth Tub compost tubs. She remembers a visit by her former manager, the Director of Manufacturing at Fox Racing Shox, who came by Grey Bears to drop some e-waste while she was composting.

“He told me how impressed he was with how the organization, how well all of the processes were run. As a volunteer I thought that was pretty awesome.”

After a month she took over the worm composting center when former master composter, Paul McGillicuddy retired. Marla’s passion is infectious as she shares her knowledge with the public who come to learn about home composting, or to pick up worms for their own kits.

“I love sharing how amazing and efficient red wriggler worms are,” Marla says. “They work 24-7 and churn out the most amazing fertilizer. It’s so gratifying to see people just starting to compost, and becoming more connected to the earth, the cycle of life – from food scraps, to worms, to fertilizer and back into growing plants and food. I feel so lucky to get to do this every week at Grey Bears.”

Marla concludes, “Worm castings are so vital. They’re rich in nutrients and can turn lifeless dirt into vibrant soil. They also have the essential benefit of pulling carbon out of the air. How wonderful is that?”