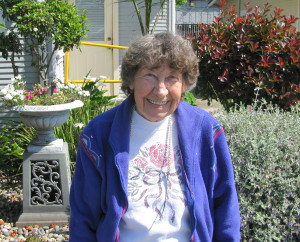 Thirty-three years on the Grey Bears volunteer trail. That’s how long Lyla Games has served the organization, and at 85, she still rises early every Thursday and Friday morning to supervise the Brown Bag Distribution Program in Watsonville. When she began overseeing distribution of bags in Watsonville, she recalls, “fewer than 50 people participated. Today, there are about 700 of us.” She runs the program at two Watsonville sites: On Thursdays at the VFW facility on Freedom Boulevard, and on Fridays at the Elks Lodge on Martinelli Street.

Recounting the formative days of Grey Bears, she and her late husband moved here from Ohio. “We noticed how the pickers in the fields left considerable produce on the ground, amounts too small to sell. That was the very early days of ‘Seniors Helping Seniors.’ We felt bad that all that food was wasted. So we’d glean it and throw it into my husband’s Ford pickup truck and offer it to other seniors.”

Lyla started with Grey Bears in Scotts Valley and watched it expand as it outgrew its facilities, from Fair Avenue to Brown Ranch to Chanticleer. Lyla has seen and done it all. She made craft items for sale, worked in the newspaper rolling room and devoted 15 years to the Thrift Store.

“The first week the store was open,” she recalls, “we made 80 cents.” Lyla has made life-long friends from the Thrift Store. “It wasn’t so much about selling as it was about getting to know the people who shopped there. When they entered the store, it was like walking into love.”

Was Lyla always a non-paid volunteer? “Oh no”, she says, “I worked over the hill for a Polaris missile contractor in San Jose that served the U.S. Navy and Lockheed. Back then, in the mid-1950s, her husband was employed by Ford Motor Company in Milpitas.

Lyla, who lives in Corralitos at the top of a hill with great views of Monterey Bay, is proud to report that her grandson Jason has “met the love of his life and plans to marry her. Amazingly, his fiancée’s name is also Lyla, the same name as grandma!

It is volunteers like Lyla, one of a small army of 500, who bring so much love to what they do that it instills passion in others. And that spirit is what keeps Grey Bears alive – and thriving.

Lyla will be honored at the Grey Bears Volunteer Recognition Luncheon and Member Party on Wednesday, May 23, from 11:30am – 1:30pm in the Grey Bears Warehouse, 2710 Chanticleer Ave in Santa Cruz.

(written by by Paul Plansky, Grey Bears Board Member)