How the US can solve food waste problem 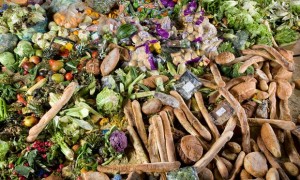 An $18bn proposal aims to reduce the more than 52m tons of food waste that goes to landfill every year.

(The Guardian – Wednesday, March 9, 2016) — Businesses could save nearly $2bn a year by cutting the amount of half-eaten entrees, unsold milk and other foods that get tossed into trash bins across the US by 20% over the next decade, according to a new report.

The report, Roadmap to Reduce US Food Waste, released Wednesday, lays out strategies that companies, along with governments, consumers and foundations, can implement to reduce the amount of discarded food in the country by 13m tons a year.
Cutting food waste by a quarter would mean enough for everyone, says UN
Read more

The $18bn plan from the report comes after the US government set the first ever national goal in September to cut the country’s edible food waste, aiming for a 50% reduction by 2030. Read more>>>