“I just like to do things for people,” says Eola Cross, 91, and a Grey Bears volunteer for 35 years. The idea of neighbors caring for each other was a core value instilled in Eola during her upbringing in DeQueen, Arkansas in a family of 12 kids. 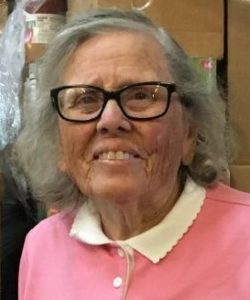 “If a barn needed to be built, everyone helped. It was tough in those days,” she remembers. “At one point we went without food for three days. I promised God that when I made it through the Great Depression, I wouldn’t see anyone go hungry if I could help it.”

Eola received Second Harvest Food Bank’s Hunger Fighter of the Year award on March 7, 2018. She oversees the Grey Bears weekly crew of volunteer delivery drivers, coordinating the distribution of hundreds of bags of food, cooks and delivers food for the Seventh Day Adventist meal for needy families and the homeless, and picks up produce from Second Harvest in the early morning hours so she can personally deliver it to seniors who are homebound.

Eola left home at 17 and moved to Baton Rouge. She met her future husband, Lester Cross, during WWII while he was serving in all theaters of the war. “We had gas rationing, shoe rationing and we raised a lot of our own food in victory gardens.”

They were married in 1945 after he returned when Eola was 19, and lived in Lester’s hometown of Indianapolis for 16 years. They moved to Santa Cruz in 1961, and to Watsonville in 1976. Eola remembers hearing about Grey Bears when the organization was just getting started in 1973. A friend suggested she join and volunteer, but her schedule was full with a range of work and activities, including caring for foster children.

“We had one child and three adopted children, and we took in a lot of foster kids, too. I guess we’ve cared for more than 100 different kids over the years. If a kid was in trouble, we wanted to help do something about it. And none were in trouble again,” she says proudly. 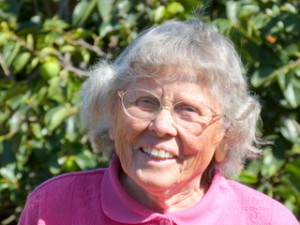 In May of 1983, Eola’s long journey with Grey Bears began. “The old truck would drop about 150 bags at the (former) Church of Christ on Freedom Boulevard. I took over the only homebound delivery route in Watsonville, delivering bags to 39 people. I’d have to load up my car with bags twice to get them all out.”

She drove the route until 1990 when her husband became ill, but kept working at the site, unloading the truck and helping load cars as more homebound delivery routes were needed. She took over managing the site soon after and has been there ever since. “Every week the bag pick up is an event we all look forward to, where people come early to get together, to visit and socialize.”

Eola also cooks for the homeless center, from when the rain starts till spring. “If we all just do what we can, to give what we’re able to, there wouldn’t be all the problems in the world. It makes me very humble that I’ve been able to do whatever I could for others, because it has come back to me many fold.”