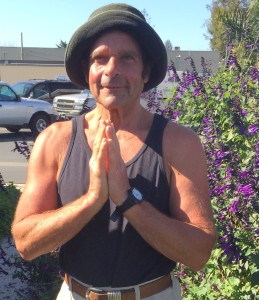 Why Grey Bears: “About five years ago a friend invited me to Grey Bears and I found my service calling. I was amazed at the brown bag operation, to distribute so much food to seniors who need it. I’m in the warehouse five days a week, in quality control and the brown bag line. I also glean produce from fields and orchards, and help with security.”

Career: “I’ve worked in construction for most of my adult life. In 2000 I fell off a scaffold and shattered my left knee. I didn’t want to make a fuss with my employer, and thought I’d tough it out till it heeled. I was frozen up in a wheelchair with terrible pain. Eventually I had two surgeries and lots of physical therapy. I worked hard to rehab it, became a gym rat and did lots of yoga. I still have some pain, but I find the harder I work and the better shape I’m in, the less pain I feel.” 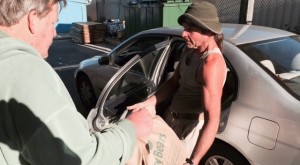 Thoughts on service: “I have a deep affinity for the lessons of the Bhagavad Gita: work hard and perform good actions, and to offer these efforts to serve others without attachment or expectation. I see the brown bag line as a dance, it’s like choreographed movement, it’s my yoga.”

Any lesson along the way?: “I left Grey Bears one day, fired up from the work. Pulling onto Soquel I cut off a car that happened to be a police officer. He pulled me over ready to write me a ticket. I apologized for driving aggressively, and said I had been volunteering at Grey Bears and was a little too fired up. The officer said that a close relative also volunteers at Grey Bears. He took mercy on me and let me off. Now I do some deep breathing at the wheel before leaving the campus.”

Special projects?: “I’ve been involved in promoting industrial hemp in food applications for more than 20 years. I’m writing a book on personal uses of hemp, including using soaked, sprouted hemp seed for food. It’s abundant, easy to grow, an excellent protein, clears plaque from arteries and fortifies the immune system. In 1992, 13 police and feds kicked my door down to confiscate the seeds. I was prosecuted but won the case.” 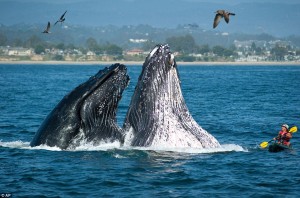 Claim to fame: When I’m not working or volunteering at Grey Bears, you can find me paddling a kayak on the Bay. Local photographer, Paul Schraub, caught a photo of me on my kayak a few feet from two breaching whales. The photo went viral on social media and was covered by national news.

Favorite food in brown bags: I love cabbage and carrots; they’re highly nutritious, inexpensive and have a long shelf life. I also really appreciate the lentils in the brown bags, and encourage everyone to try sprouting them.